Have you noticed that sometimes developers DO get it right but then are faced with strange user behaviours? No, I’m not talking about developers thinking that something should be the case, which isn’t. I’m talking about a strange chain of events on Facebook which makes me doubt the motivation of some language activists (yes, we’re allowed to self-criticize guys!).

We all know about Facebook. What we don’t all know about Facebook is that they have a pretty bizarre approach to translations (we can hardly call it localization…) and I don’t mean the fact they, for the most part, rely on community volunteers. No, it’s the process. There’s no clear process of adding or registering a new project and heaven knows how they actually pick the languages. At one point, Rumantsch was in (it now isn’t, no idea how it got in or why it’s now out, it’s a fairly small language with between 35,000 and 60,000 speakers), as is Northern Sami, Irish, Mongol and the usual big boys, including some questionable choices like Leet Speak and Pirate. So most languages are out. Not surprisingly, this has led to a number of Facebook groups and campaigns by people trying to get their  languages into the project. There used to be a project page full of posts along the lines of “please add my language” and “how do we get Facebook to add our language?” – universally met with thundering silence. Admins were rarer than Lord Howe Island stick insects.

Back in whenever, a chap called Neskie Manuel had a crafty idea, about getting his language, Secwepemctsín, onto Facebook. Why not, he figured, find a way of overlaying Facebook with a “translation skin” in order to make the process of translation (and in this case even localization) independent of Facebook & Co? It was a neat idea, which was somewhat interrupted by his sad and untimely death.

Now, round about the same time, two things happened. The Bretons set up a “Facebook in Breton” compaign. Fair enough. And a chap called Kevin Scannell took on board Neskie’s Facebook idea. Excellent. Before too long, the Facebook group had over 12,000 members and Kevin had released his script for a slew of amazing languages. It overlays not all of Facebook but just the most visible strings (the one’s we see daily, not the boring EULAs and junk). Even more amazingly, it can handle stuff Facebook hasn’t even woken up to yet, such as plurals, case marking and so on. Wow indeed.

The languages hailed from the four corners of the planet, from Aragonese, Manx and Nawat through Hiligaynon, Secwepemctsín, Samoan, K’iche’ and Māori to Kunwinjku and Gundjeihmi (two Australian languages). Wow indeed. And, of course Breton. 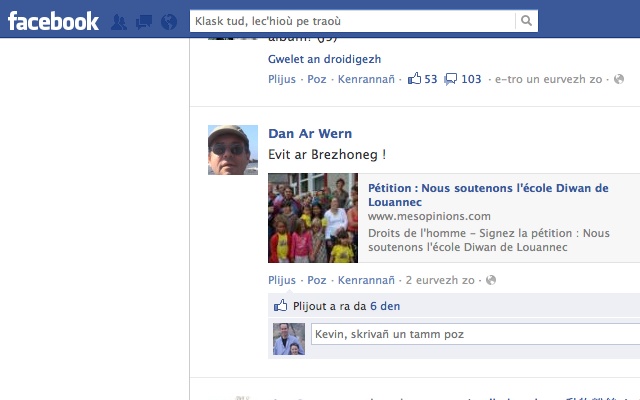 Now here’s the bizarre thing though. Ok, it’s not the full thing but who’d turn down a sandwich while waiting for a roast chicken that might never appear? No one, you’d think, so based on a combined market share of some 50% between Firefox and Chrome, some 200,000 speakers and 12,000 people in the “Facebook in Breton” group, you’d expect what, anything north of 6,000 enthusiastic users of the Breton script. After all, more than 1,100 people installed it in Scottish Gaelic (less than 60,000 speakers) and more than 500 people in Manx (way less than 2,000 fluent speakers).

A case of “you’d think” indeed. To date, a mind-boggling 450 people have installed it in Breton. As far as I can tell, the translation is good and was done by a single, highly fluent speaker (Fulup Jakez who works for Ofis ar Brezhoneg). So it’s not a quality issue. The scripts work (I use the Gaelic one) so it’s not that either. The Facebook group was notified several times, so it’s not like they didn’t know. Ok, so maybe not all Likes of the group actually are from speakers, fair enough, but glancing through the active posters, a lot of them seem to be in the right “linguistic area”.

So while the groupies are still foaming at the mouth about the lack of support from Zuckerberg and Co, there’s a perfectly good interim that would allow you to say Kenavo to French and Degemer mat to Breton on Facebook every day. I really don’t get it. Is it really the case that some activists are more in love with the idea of the thing than would actually use it if it was around? Or am I missing something really obvious? I sure hope I am…

On a more positive note, I hope the general idea of this type of “overlay” will eventually take off big time. We will never be able to convince the big boys to support all the languages on the planet, all of which are equally worthy of services in their own languages, whether they’re trying to re-grow lost speakers or whether they’re just a small to medium sized community. So having a tool that puts control over what we see on our screens into our hands would be great. No more running from company to company trying to make the case for adding language X, a little less duplication (I don’t know how many zillion times I’ve translated “Edit picture”), better quality and more focus on the important bits of an interface to translate (not the EULA for example… a document that sadly every software company is keen to have translated as soon as possible without ever asking who’ll read it). Ach well, I can hope…

Great piece, and yeah don’t get it either. Is it just that people are not used to having the option yet? In that people who can and want to be bi or tri lingual are taking awhile to adjusting to not being monolingual online?

Maybe it’s a bit like when FB itself changes the interface, or Microsoft changes Windows: change, good or bad, is hard to adapt to.

I agree, change is hard. But crying for change and then getting cold feet en masse when the change you wished for knocks on the door is… baffling.

Way to go, Kevin! Saving languages is a really good way to spend your life ☺
Keep up the good work and may people realize how really important it is.

Some people will do anything for a language — except actually using it themselves.

Honestly I’ve never seen the point of translating the interface, at least in the case of minority languages where *everyone* also understands English/French/Spanish … Also I’ve occasionally had to use interfaces in languages I hardly know and most things are fairly intuitive, and those that aren’t would probably be obscure whatever the language. Much computerese is jargon anyway. Is it really useful to invent equivalent jargons for every language, does this strengthen them or just look silly? (Genuine question, I’m not sure either way). So maybe the Bretons share my POV, namely ‘why bother?’ Surely it’s the language you create content in, and the amount and quality of that content that matters, not the few words written around the edges. Better to spend you time translating user tutorials etc.

I fundamentally disagree. On all points actually 😉

It’s rather under-researched but the metalanguages does seem to have an impact on usage patterns. And given the all-pervasiveness of technology, the amount of linguistic interaction with technology isn’t going to lessen. “Out of sight, out of mind” does seem to apply.

Secondly, in my experience in trying to ‘peddle’ localized software, the stumbling block is something entirely different – when we run a face to face workshop for people and show them what there is and how to get it, they get really enthusiastic. The issue seems to be that the vast majority of people just use their computer ‘out of the box’ the way it came and aren’t really confident installing and uninstalling stuff.

Thirdly, content is good of course too but… who on earth ever reads a flipping tutorial? Nobody. When things go wrong, you hit Google because you *know* that the tutorial is only ever going to be utterly pointless. It’s about as much of a waste of time as translating a license agreement.

Gabh mo lethsgeul, I’m not out to wind you up, and actually appreciate all the good work you do. But clearly our styles are different. You say you Google for information, well who doesn’t. But someone somewhere has to have written the content you access, but it a HowTo or an Info file or a YouTube instructional video. The barriers to using languages on computers are (or rather were) problems with character sets, diacritics, keyboard layouts and so on. I use online dictionaries (including yours — móran taing!!) but find spellcheckers mildly annoying.

Now I can definitely see the point where you have something like a message board intended for use with a particular language, if the software can be hacked so that all the messages on the site come up in that language, it helps to establish the right ethos. But that’s not the same as you operating system, browser of whatever, which you’ll probably use with several languages, even within the same session, unless you really are a complete monoglot. There is an argument for having interfaces in, I don’t know, Tamil or Estonian etc. but much less so for the Celtic languages where everyone quite literally also knows English/French, and no doubt frequently uses that language on line.

Where a computer or internet term has passed into everyday non-technical usage, then clearly it needs to be given an equivalent in other languages, but most of the stuff is esoteric tech jargon which might as well stay in English. If computers had happened a few hundred years ago it would no doubt all have been in Latin, as much scientific and medical terminology still is. I’ve only ever seen one computer language that wasn’t English based, (and that was based on Klingon!) So I rest my case.

But of course the great thing about the web and OS in particular is that if people want to make something then they can just go ahead and make it. People will do what they believe is worthwhile, and their energies aren’t transferable. So good luck! So things will prove useful others not, and so I suppose I shouldn’t prejudge the outcome of any project.

But this all began because you couldn’t understand why the Bretons weren’t interested in your work, and all I did was to suggest an explanation; namely that they saw no need for it, or at least few of them did. I suppose you need to ask them though …

Ok, thanks for expanding on that 🙂 There probably is an element of ‘who cares’ with some of those who know about the existence of such things but don’t make any attempt to use them, we’re talking a very varied group of people of course. But on the the whole, in my experience at least, for the majority there are fairly basic practical issues preventing them from doing so (not knowing about them in the first place, being unsure about installation, being worried about not knowing the terminology, living in a mixed language home…) rather than philosophical objections. We’ll find out eventually.

Yes there is jargon but funnily enough, the localizations into Gàidhlig or such languages are frequently more readable than the English!

But as you said, there’s room – and indeed a need I’d argue – for all sorts of participants. I prefer the meta-tools, and you the content – which is good cause I’d fail terribly at trying to make a video about baking biscuits!

Tags used in my posts